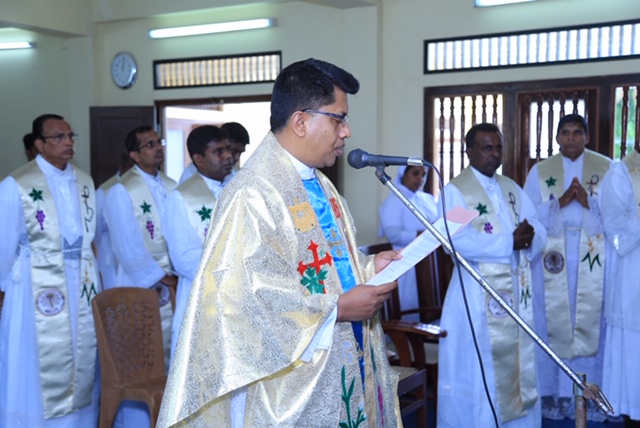 CCRR 100: ‘The Provincial Superior is called to the service of authority. His responsibilities embrace both the specific mission of the Congregation within the Province and the religious apostolic life of its communities and members. His personal authority extends to all persons, communities, and works of the Province, as determined in the Constitutions and Rules.’

On 5th of October, 2020 at this morning Eucharistic Celebration, Jaffna Province is installed with another new Provincial, a son of St. Eugene de Mazenod and the legal representative of the Superior General Most Rev. Fr. Louis Lougen OMI. This is also a historical day, when our mother Province welcomes the new Provincial in the line of Rev Frs. Louis Ponnaiah, P. P. Philip, Jesunesan, Jeevendra Paul, Selvaradnam, Paul Nadchethiram and Edwin Vasantharajah.
With the consent of his Council meeting in plenary session, the Superior General has appointed Fr. Eugene BENEDICT as Provincial of the Jaffna Province of Sri Lanka for a first term in May 15, 2020.
Very Rev. Fr. Eugene Benedict was born on October 29, 1970, in Mutur, Trincomalee, then Diocese of Trincomalee – Batticaloa, and now the Diocese of Trincomalee, Sri Lanka. He entered the Sacred Heart Oblate Novitiate in Bandarawela, Sri Lanka, in September of 1992, where he professed his first profession to the congregation on September 8, 1993. He continued his study at the Oblate Scholasticate in Jaffna and Kandy, Sri Lanka, professed perpetual vows in Mannar on October 10, 1997, and was ordained priest at the Church of Our Lady of Presentation,  Thandavanveli, Batticaloa on May 2, 1998.
Upon receiving his first obedience to the Delegation of Pakistan, he worked in various parishes in the Punjab Region and in Quetta Prefecture. In 2001, Fr. Benedict received from Most Rev. Fr. Steckilng, then Superior General, presently serving as a Bishop, a new obedience to the then Vice-Province of Jaffna. He was appointed as the Director of Jesuit Relief Service, called JRS in Jaffna in 2007 in the midst of Civil War- 2008 and in Trincomalee in 2008 -2009. He too served for many years as parish priest in Haputale and in Lunugala parishes in the Diocese of Badulla, and was serving as an acting parish Priest for few years in Batticaloa and Trincomalee Dioceses, and as Superior of the community of ‘Amala Uthayam‘  in Tricomalee, until his appointment to the service as Provincial.
Fr. Eugene Benedict graduated in Moral Theology in 2011 from the Pontifical University of Thomas Aquinas in Rome, Italy. He also served the local Church in Sri Lanka as Episcopal Councillor, Diocesan Director of Family Apostolate, National Secretary of Family Apostolate, National Secretary of the Forum of Moral Theology (CFSL), The Editor – Neerodai – the Diocesan Bulletin, Diocesan Director for Migrants – Health Care Workers – Tourists – Prisons and sea farers. He was a member of Diocesan Senate and he was the President of (RRU) Regional Religious Unit.
Fr. Eugene is not new to the Administration of the Province for he has been serving as one of the Provincial Councillor and secretary at the Administration of Fr. S. M. Edwin Vasantharasa OMI, the outgoing Provincial, from 2014 up to the present.
At this joyous and hopeful occasion, we welcome our new Provincial to the service of leadership where Jesus Christ is alone the Master and God. An Oblate Provincial is the first Oblate in the Province and he sits at the chair of our dear Founder and deserves full loyalty and obedience from his fellow members. His quality of faith, prayer life, actions, thoughts, intentions, plans, executions, and relationships are very very vital for the life and continuation of the Province fully depends on them. This Province has gone through many ups and downs. Experienced day of war, exodus, migrations, deaths, disappearances, and trials. Many have contributed to the construction of this Province and have brought to this state. Now this noble responsibility of Spiritual Leardship is laid upon the shoulders of Very Rev. Fr. Eugene Benedict, surely the Other Oblates will share his responsibilities.
The Constitution 101 CCRR reads thus: ‘In his animation of the Province, the members of his Council and, with them, he develops his action plans. He works closely with the Superiors of local communities and those in charge of formation.’
We are a major religious congregation, have been serving in our dear mother land and its Dioceses, for about two centuries, and historically we have invited and created some religious and lay congregations in the country. We pray for Fr. Eugene Benedict OMI, that our Lord Jesus, give him good health of mind and body, illumine his wisdom to take correct decisions, fills his heart with divine compassion to understand his fellow brothers,  strengthen his hands to take apostolic enterprises. Let us also pray for his newly appointed council members: Fr. Godfrey, OMI, Fr. Loshington, OMI, Fr. Alfred, OMI, Fr. Jeyarajan, OMI, and Fr. Segar, OMI that they understand their responsibilities and duties in collaborating with the Provincial and work for the evangelisation of the most abandoned and for the life of the Province of Jaffna.

“You know that the rulers of the Gentiles lord it over them, and their great ones are tyrants over them. 26 It will not be so among you; but whoever wishes to be great among you must be your servant, 27 and whoever wishes to be first among you must be your slave; 28 just as the Son of Man came not to be served but to serve, and to give his life a ransom for many.” (Matt 20,26-28).