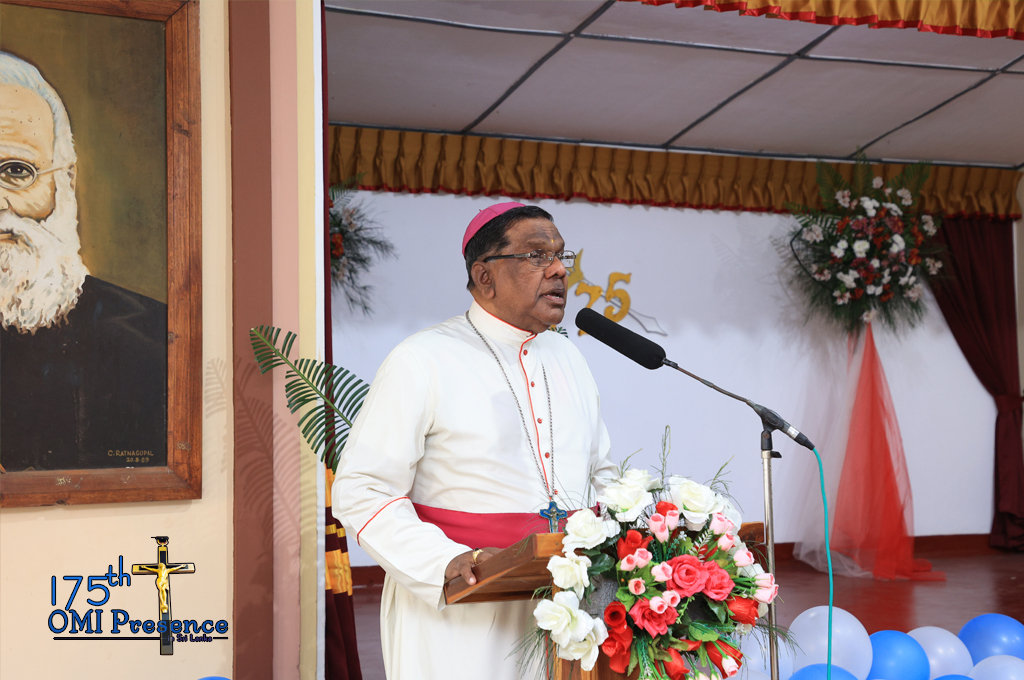 First of all I like to congratulate the Oblates for soaking 175 years of service in this island. Mgr. Bettacchini was under pressure to have more priests. He was not satisfied with the Indian Oratorians so and the people at the same time were demanding that they should be looked after. It is because the Anglicans started their own schools and missions; the Presbyterians and the Methodists, central college and St. John’s here. So the catholic were left without any education at all. So they were pressing Mgr. Bettacchini; he went to Rome to get some priests and he couldn’t get. And he was told to go to Marseille there is a bishop who is very much interested in sending missionaries to the poor countries. So he met Bishop Eugene de Mazonad at Marseille and appealed to him. That is how the Oblates of Mary Immaculate were brought in to Sri Lanka.

And then once again the people said we need English Education because the British were prepared to give jobs; rather than employing an English men, they found it cheaper to employ somebody here. They started to picking up men for their works and Catholics were right behind. The priests who came here were mostly French and Spanish. They did not know English at all. Again he was under pressure to get some English speaking priests. This is how some came from England and Ireland. And they served in Northern Vicariate which started from Negombo bridge that is Wennapuva, Jaffna and went up to the East. Then Chillaw was carved out and the eastern provinces were carved out and given to the Jesuits. This was under the Oblates who were looking after up to Kurunakala, which were looked after by the bishop of Jaffna. So that’s the time the Oblate missionaries went very deep and started propagating the faith.

On the side of education they brought in priests from there and the Catholics were given. Then there was a complain regarding the girls who were neglected; The ministers of Anglicans and Methodists had wives; they started teaching embroidery and English cases to the girls. People said our girls also need to be educated.

They went again and Holy Family Nuns were brought by the Oblates. That’s  the pioneering work of the Oblates. We are very grateful to them for sowing the seed of faith at very difficult times. They did not have any vehicles at all. They went by bullock carts and bought the lands wherever they found. They used to stay closer to the river, cooked and took bath. That’s how we spread out to Chillaw. The Oblates, the great visionaries, bought the lands to the view of supporting the Church later on.

We found that they went through tremendous hardship. For example I know Fr. Lebourn, OMI, a French missionary, was at the Aripputhurai now it is called Muththaripputhurai. He had a cart and a bull. He started from Aripputhurai where he stayed and went to Silawaththurai, Mullikullam and so on for Sunday Mass. He wrote to bishop saying that the bull died,and he needed money to buy a bull. Bishop Guyomard wrote a letter to tell him “you better take the Mass box on your head and go”. Only an Oblate bishop can write to an Oblate. The Mass kit is not like ours; you have to have the altar stone, huge candlestick, and the Latin Missal is very heavy. These things are found in the Codex writer in French.I asked Fr. Lebourn, “did this happen?”. “Yes it happened”, he said. So he went carrying with the box. Then later on bishop might have sent some money to buy a bull. That is one example that I give of the way they worked. Even later on, I have seen that they were dedicated to the Church and to the Congregation, they never failed. I am one of those being educated by the Oblates.

And then we have the Christophe-Etienne Bonjean who is known as the father of denominational school. He fought for the rights of all even the Hindus that the grant should be given to everybody, because they cannot separate. He fought for the Hindu college as well. I always tell the Jaffna Hindu College, ‘mind you,one of our priests who fought for this Morgan community and got the grant for all’. He was an educationalist and wrote so many books on education. Being a French man,he was very fluent in English. That’s a type of missionaries you had here and we are very grateful and thankful to you and we wish that you continue the mission.