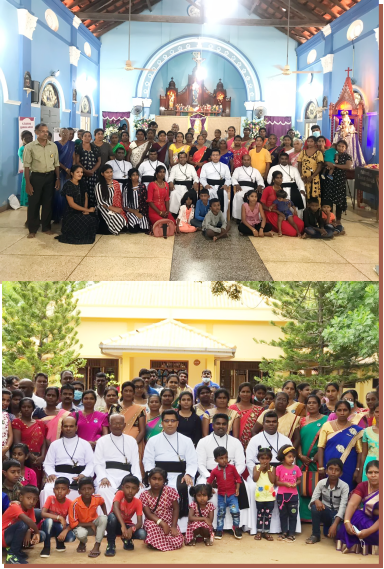 The members of the Missionary Association of Mary Immaculate (MAMI) in the dioceses of Jaffna and Mannar gathered at Gnanodhayam on the 6th of March and at Chaddy on the 12th of March in order to celebrate the 175th anniversary of the presence and mission of the Oblates in Sri Lanka. Since these events took place during the season of lent the members had the opportunity to renew their Lenten commitment. At Gnanodhayam the members from the parishes of Thalvupadu, Eluthoor, Mannar, Pesalai, Muththuaripputhurai and Keeliyankudiyiruppu assembled. Our programme started with a thanksgiving Eucharistic Celebration presided over by Very Rev. Fr. Eugene Benedict, OMI the Provincial Superior of the Province of Jaffna, which was followed by cultural events which created an opportunity to bring out participants’ various talents. The event at Gnanodhayam came to a close with a fellowship meal.
At Chaddy, members gathered from the parishes of Jaffna, Mandaitivu, Ilavalai, Mathagal Kopay, Venpuravinagar and Chaddy. After their arrival to the shrine, an input was given by Rev. Fr. Jegankumar Coonghe, OMI, the administrator of the Shrine in which he mentioned explicitly the role of the lay members of Our Congregation. This was followed by the way of the cross conducted by the members and a Thanksgiving Eucharistic celebration was presided over by Our Provincial Superior. The event ended up with Agape. The events in both places were very successful and our Provincial Superior in his speeches appreciated the enthusiasm, eagerness and commitment the lay members have and our mission being fulfilled through the support and collaboration of the laity. These gatherings were great opportunities for the lay members to get to know other units and to feel the sense of belonging to the Congregation.