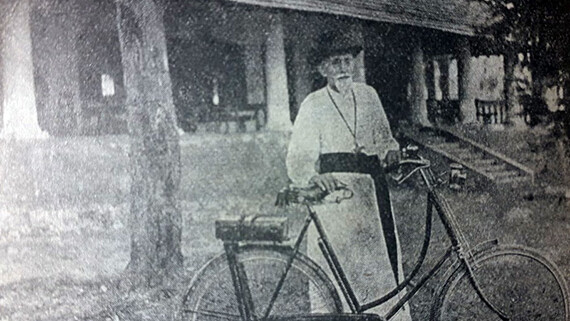 Do you need something Brother Józef will arrange everything. Including horse and cigars.January 31, 2022

When we enter “Sri Lanka” in the search engine, the first results displayed are tourist offers: “Sri Lanka – the exotic within your reach!” One of the holiday offers shouts from a small monitor. When I was in the fifth grade of primary school, a missionary came to our school. One of my colleagues raised his hand vigorously and said: “I love traveling and sightseeing, someday I will be a missionary like a priest.” For the next few minutes, the invited guest tried to explain to us the differences between missions and trips abroad. What are the key differences?

First of all, missions are not some private initiative. The community of the Church sends us on missions. You are not going there to learn about a foreign culture, satisfy your curiosity or try the local cuisine. Mission is to proclaim Jesus Christ. Missionaries do not sleep in hotels and resorts. They are always to be close to the people they work with. Missions are not vacations, missions are life.

But let’s go back to Sri Lanka. Oblate missionaries arrived on the island in November 1847. They were invited by the Italian bishop Orazio Bettachini. They started their work with the catechesis of the youngest inhabitants. With the bishop’s help, they built two schools for male youth in a short time. They also established a library with a book collection in the local Tamil language, which was rare at the time.

While the English and Irish Oblates were developing missions in Ceylon, in a small town near Ko?cian, Br. Józef Andrzejewski, OMI. He was a peer of Stanis?aw Wyspia?ski. In his youth, he moved to the western part of Prussia to work there physically. A few months before the resignation of Otto von Bismarck, twenty-one-year-old Józef heard the voice of vocation in his heart and entered St. Gerlach (the Netherlands) to the novitiate in the Congregation of the Missionary Oblates of Mary Immaculate (the Polish Province of Oblates did not exist yet). He was the first Pole to take temporary vows in the Congregation.
After eighteen years of service in the Netherlands, the Oblate superiors sent Brother Joseph on a mission to Ceylon, which was then a British colony. From the beginning of the mission, Brother Józef learned the Tamil language. It was difficult for confreres from other countries to pronounce his name, so they jokingly called him “Whiskey”. There, he was the treasurer of the bishop’s house in Jaffna. What exactly was his job?

His confreres called him “the man of everything.” Do you need anything? Brother will arrange it for you. He received letters from missionaries from different parts of the island asking for the products they needed. Usually it was about mass wine, incense or communicants. But there were more peculiar requests:

The doctor recommended a light broth for me, let my brother send some pigeons,

Next week parliamentarians will be here, so we need 150 cigars,

A motorcycle does not work in Ceylon conditions, let Brother get the horse, if you please.

The needs of the missionaries varied, but with God’s help, Brother Joseph made efforts to bring in everything. In his room, on the desk, there was an image of Our Lady of Cz?stochowa, reminding the Oblate of his homeland.

After nineteen years, his health deteriorated slightly, so his superiors sent him to Poland for a few months’ rest. He gained the necessary strength and returned back to Ceylon. The last years of his life, the Polish missionary took care of Ceylon youth.

Brother Józef Andrzejewski OMI died in 1939 in Jaffna, when Andrew Caldecott, the author of popular science fiction novels, was the governor of the island. Unlike the governor, Brother Józef did not write any book, and he had no influence on world politics like Otto von Bismarck. He was only faithful to the end of his mission. “However, do not be glad that the spirits surrender to you, but rejoice that your names are written in heaven.” (Luke 10:20). In the end, that’s all that matters.